Things that make your body rusty are: excessive caloric intake, lack of exercise, unbalanced daily habits, and fixed concepts.
Take in oxygen in large quantities letting all cells of your body activate and get a healthy body!

Mitochondria is a production plant of energy

We need energy in order to live. Many people have the image that we take in energy from a meal. In our cells, there is another energy which called ATP. ATP is produced when mitochondria produce water by uniting the oxygen and hydrogen of nutrition.

In other words, when we do the correct breathing and take oxygen in large quantity, we can live with an appropriate appetite without depending on an unbalanced energy intake through excessive meals (this is the secret of how mountain hermits or disciples can live by only drinking water and without eating any foods). We’d better stop thinking of “the energy from calorie intake (depending on sugar source energy)”, and focus on “the energy of the mitochondrial system”.

The secret of anti-aging is mitochondria

When mitochondria is activated, each internal organ and muscle will be activated and metabolism will also increase. You will be able to obtain a body state which does not easily grow fat. Moreover, the regenerative ability of your cells increases, so you’ll be able to have beautiful skin. When mitochondria make energy, the production of active oxygen is controlled. From these points, we can expect the anti-aging effect and the healthy longevity. 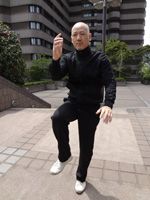 Increase mitochondria in your body!

If we do not get enough exercise in daily life, the numbers of mitochondria in our body will be decreased. Mitochondria exist more in slow muscles (assuming instantaneous force) than fast muscles (assuming enduring strength). Trainings of A-Ray Style Chu Shin Qigong are based on maintenance of the correct posture which uses slow muscles. In many of trainings the motions are interlocked with breathing, especially in Tai Chi and Hachi Dan Kin, which move your body slowly develop slow muscles. They are very effective for increasing mitochondria.

Overeating is caused by stress!

There are many people who fall into overeating from stress. Because a strained state continues for a long time, people demand a feeling of freedom or a kind of adrenaline rush. We’ll be able to keep a right appetite by producing large quantities of serotonin by Chu Shin Qigong, adjusting the balance of the autonomic nerve, and making the condition of mind and body better.

The effect of the breathing method

In A-Ray Style, we breathe from the abdomen by bending your lower back at the waist deeply and extending the movement of diaphragm. This correct breathing is effective in not only being able to take in oxygen in large quantities, but also stimulating and massaging the bowels and each internal organ. We can keep the bowels open by improving the environment inside bowels. The correct breathing increases abilities of the digestive and absorptive function, which improves the blood flow and detoxification.

Let’s remove rust of our bodies before it’s too late! 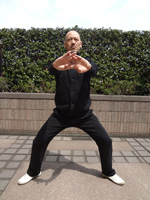 We stoop at old age in both our back and waist. Since our knees, shoulders, and other joints also become weaker, our posture will be worsened. It is because there is an unbalanced posture and a habit of consciousness and thought letting you do so on a routine basis.

Maho is one of basic postures in Chinese Qigong called Hachi Dan Kin. Part your legs widely, crouch your back and lower your body. This posture makes the lower part of your body strong and gives you beautiful, slim legs at the same time.

・Decline of the bodies is mitochondrial decline. The cause is lack of oxygen by shallow breathing.

・Remove unnecessary tensions which you have unconsciously.

・The person who has been rusty doesn’t gain a sense of danger to be rusty.

・The cause of being rusty is the biased concept. Chu Shin Qigong can change conceptions.